Home » The impact of removing red diesel for construction

The impact of removing red diesel for construction

Site security, due to the increased risk of fuel theft, and passing on the increase in costs to clients are the biggest concerns for contractors when red diesel is withdrawn from use in construction in April 2022.

The removal of the tax discount on diesel used in construction plant (Red Diesel) will have a significant effect on the cost of construction, particularly the plant heavy building trades and civil engineering (see details of changes below).

BCIS carried out a survey in February-March 2022 to understand the challenges facing construction with red diesel removal and inform the adjustments required to its indices, particularly the Price Adjustment Formulae Indices (PAFI).

All the responses came from the civil engineering sector, which itself suggests that this is where the biggest impact is expected. The survey responses provide an insight into the fuel use challenges facing contractors as they grapple with reducing carbon emissions.

The respondents’ current use of Red Diesel ranged from 10% to 95% of their site plant fuel use. Currently more than a third of the respondents already use alternative fuels – Hydrotreated Vegetable Oil (HVO) – in their site plant. For one survey respondent HVO represents 25% of their fuel use, for the remainder, HVO represented 5% or less of the total fuel consumption. One fifth of respondents mentioned the use of other fuels, which included petrol and QP5.

From April 1st, most respondents intend to switch to White Diesel (DERV) although one fifth say they will increase their current use of HVO to between 50% and 100% of total consumption. The latter are currently using HVO in variable proportions and plan to significantly increase the share of this fuel type after April, with one planning to increase the usage 14-fold. Crucially, respondents who currently are not using HVO have no plans to start using it as an alternative from April.

When asked about the expected increase in fuel costs, respondents anticipate the cost increase to be in the range of 55% to 93%, with an average increase of 73%. Responses to this question have been submitted at Mid-March prices. BCIS will follow up with the respondents in the beginning of April to understand if the actual increase is in line with the estimates provided.

The key challenges in switching from the red diesel cited by the respondents were:

In addition, concerns were raised around risks of environmental incidents as well as the lack of alternative technology/infrastructure and supply chain’s capability to provide alternatives.

The change in red diesel rebate will also affect haulage industry and crucially, the production of energy intensive construction products including quarrying, asphalt, and concrete, at a time when the industry is dealing with a broad range of spiraling material costs.

Although passing on price increase to the clients was identified as one of the main challenges, half of survey respondents stated their intention to pass on the full price increase to their clients. As presented in the chart below, some contractors expect to absorb a part of the increase in the short term and are concerned that there is potential for delays to projects where clients have not budgeted for the increase. 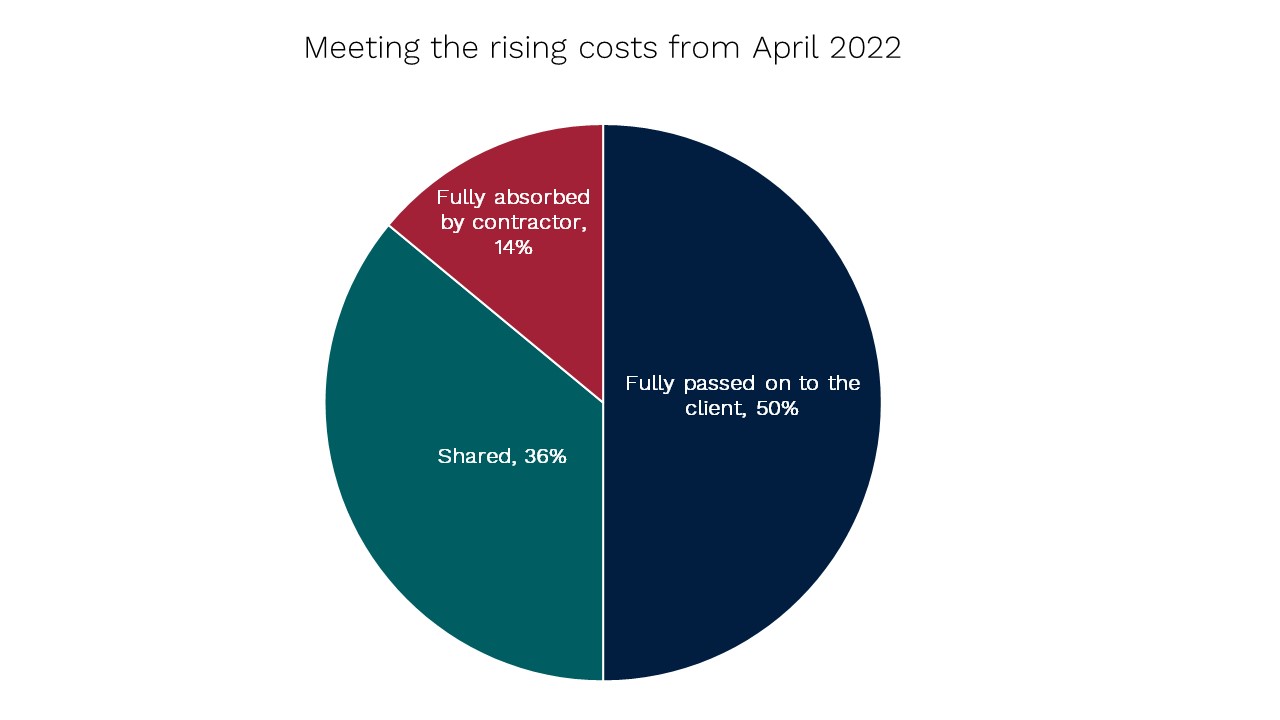 One contractor commented that even if some works qualify for rebated fuel usage it is impractical to switch fuels and clean tanks between operations so they will need to use white diesel and pass on price rise.

85% of respondents consider a full switch to alternative fuels to be viable but give no timescale. The eventual substitutes for diesel are expected to be electric vehicles, Hydrogen and HVO. One of the respondents cited HVO to be an interim solution until Hydrogen becomes viable. The barriers to the take up of these alternatives were seen as cost, availability, and practicality.

BCIS would like to thank all the respondents and the Civil Engineering Contractors Association (CECA) and the Road Safety Marking Association (RSMA) for their help with the survey.

¹The rate of duty specified above was based on the information available prior to March 23, 2022; from this date the duty has been changed to 10.18p per litre for the marked gas oil (red diesel) and 52.95p per litre of petrol/diesel, resulting in the duty increase of 42.77p per litre.

You can find more information on the impact of the change on the BCIS indices here.